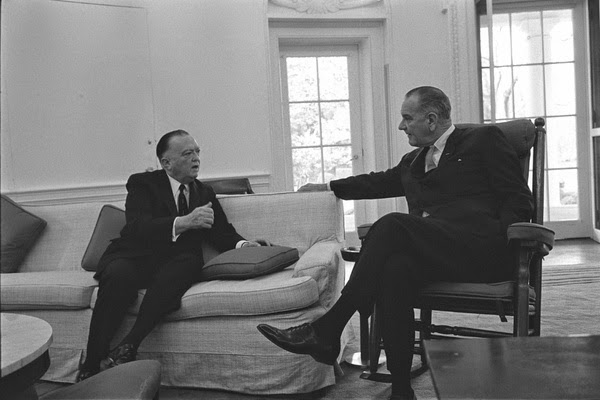 In 1994, over 30 years after Lyndon Johnson assumed the Presidency and over 20 years after his death, the United States government began releasing tapes of his Presidential phone conversations.  Among the first tapes released were those conversations he had just after the death of President John Kennedy.

On April 15 of that year, Ted Koppel featured the tapes on his Nightline program.  On it, he conducted a roundtable discussion with Johnson biographer Doris Kearns Goodwin and other Presidential historians and journalists.

One of the most interesting tapes they listened to was a 20-minute conversation Johnson had with FBI Director J. Edgar Hoover on November 29, 1963, one week after Johnson became President.

On the recording, Johnson and Hoover discuss their thoughts on the formation of a group to investigate the assassination — a committee that almost certainly became the Warren Commission.  Then they turn their attention to the facts of the assassination itself, with Hoover updating Johnson with the latest information known by the FBI.

Those facts, after only one week of investigation are very close to those we know about today, conspiracy theorists notwithstanding.  They discuss Lee Harvey Oswald's activities the day of the assassination, including his capture in the theater.  "There is no question Oswald is the man," says Hoover, "given the evidence we have."  Johnson asks about any relationship between Oswald and Jack Ruby (Rubinstein).  Hoover says they have discovered none.  He explains Ruby was a "police character" who was well known by the authorities and speculates that is how he got into the prisoner transfer area.  Hoover confides, "Dallas police didn't operate with the highest degree of efficiency."

At the end of the conversation, Hoover recommends Johnson consider a bullet-proof car.   Johnson replies, "I want to take every precaution I can... you're more than the head of the Federal Bureau as far as I'm concerned.  You're my Brother and personal friend and you have been for 25 to 30 years."

Upon hearing that last sentence, Koppel asked the panel, "What did President Johnson  mean when he told Hoover, 'You're my Brother?'"  Not a single panelist had any idea what Johnson was talking about.

Lyndon B. Johnson is rarely included in lists of US Presidents who were Freemasons; however, he was, in fact, initiated an Entered Apprentice on October 30, 1937, in Johnson City Lodge #561, at Johnson City, Texas.  He never went beyond the First Degree.

Lyndon B. Johnson and J. Edgar Hoover were Masonic Brothers; and President Johnson acknowledged it in that historic conversation.

Bro. Steve Harrison, 33°, is Past Master of Liberty Lodge #31, Liberty, Missouri. He is the editor of the Missouri Freemason magazine, author of the book Freemasonry Crosses the Mississippi, a Fellow of the Missouri Lodge of Research and also its Worshipful Master. He is a dual member of Kearney Lodge #311, St. Joseph Missouri Valley of the Scottish Rite, Liberty York Rite, Moila Shrine and a member and Past Dean of the DeMolay Legion of Honor. Brother Harrison is a regular contributor to the Midnight Freemasons blog as well as several other Masonic publications. His latest book, Freemasons: Tales From the Craft, will be released later this year.