An Insignificant Coincidence of Personal Significance 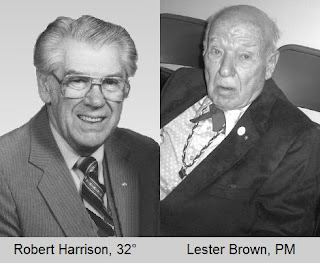 Years ago my wife Carolyn and I sat in a restaurant having dinner with my father, Robert, when an
energetic man walked up to the table and introduced himself to Dad. It seemed as if the pair were old friends; turns out they had never met before. They were, in fact, both Freemasons and the man, Lester Brown, who came up to our table had seen the Shrine pin my father always wore.

They shared stories comparing information about their Lodges and other Masonic activities, and then Lester looked at me and asked, "What about this young man, is he a Mason?"

Lester was immediately a friend because he called me "young." Despite that, however, I gave him my standard answer about joining the fraternity — "Someday." It wasn't too long after that when "someday" finally arrived and I became an Entered Apprentice. Lester was at my initiation and so was my dad.

When I became Master of my Lodge, I asked Lester to be my installing Senior Deacon. That evening I asked him about the time we met in that restaurant, "When you asked if I was a Mason, what would you have thought if I'd have said I planned to join and someday you'd help install me as Master of your Lodge?"

"I'd have said you were nuts," he snorted.

A few years later, Dad passed away. I had, by then, taken part in several Masonic services, but never with a speaking part. That day the Master asked if I would like to be the Chaplain in Dad's service. "I don't know the part," I said, "but I would be honored to read it."

This year Lester, at the age of 100, entered that House Not Made with Hands. Standing in line waiting for his Masonic service the Master asked if I would be Chaplain. "I don't know the part," I said, "but I would be honored to read it."

Those are the only two Masonic funerals I have participated in with a speaking part. As we were marching in procession out of Lester's service, I thought back to the dinner when we met. Not yet a Mason, I eventually would take part as the craft said goodbye to two Brothers who were there for me at the beginning of my Masonic experience. It's probably just a coincidence it happened that way; insignificant, really. However, for me personally, it has great significance. They both helped start me on my Masonic journey and it was a humbling honor to give back just a little bit.


Bro. Steve Harrison, 33°, is Past Master of Liberty Lodge #31, Liberty, Missouri. He is the editor of the Missouri Freemason magazine, author of the book Freemasonry Crosses the Mississippi, a Fellow of the Missouri Lodge of Research and also its Worshipful Master. He is a dual member of Kearney Lodge #311, St. Joseph Missouri Valley of the Scottish Rite, Liberty York Rite, Moila Shrine and a member and Past Dean of the DeMolay Legion of Honor. Brother Harrison is a regular contributor to the Midnight Freemasons blog as well as several other Masonic publications. His latest book, Freemasons: Tales From the Craft & Freemasons at Oak Island. Both are available on amazon.com.