Mt. Soledad is the highest point around San Diego, California.  At the top of this mountain, stands a large white cross, dedicated as a memorial to honor the veterans who have served the United States.  During my visit to the Mt. Soledad Veterans Memorial, I was awestruck at such a simple, yet powerful message that was conveyed to visitors.

The memorial recently began a program of adding plaques, each dedicated to the honor and memory of a soldier who served.  As I was casually reading the plaques, I ran across a familiar name, Audie Murphy.  Murphy who was a Major in World War II, was the most highly decorated soldier of the war and was awarded the Medal of Honor. He later became a famous actor and was killed in a plane crash.  He is buried in Arlington National Cemetery.  Murphy was a member of Hollywood Lodge No. 542 in California. 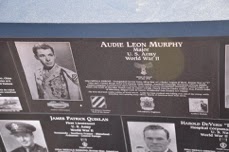 As I read further along the wall, I began to notice that some of them contained a square and compass, a Scottish Rite symbol or emblems from other groups.  In what began for me as an intended quick glance of the wall, consumed two hours of my time, as I read each of the plaques talking about the lives of the men and women who so bravely have served our country.
Yet, there was something special about masonry that motivated these service members or their family to ensure that the world knew they were a Freemason, Scottish Rite member, Shriner, or a member of the Order of the Eastern Star in a couple of cases for service women, by having that emblem on their plaque.

It was a real pleasure reading the stories of these veterans and especially knowing that I had something in common with so many of them, being a brother and member of this wonderful fraternity.  I have a photo gallery online if you wish to see more pictures.