*Editors Note When any one of the amazing contributors decides to mention me, I feel an obligation to preface the article, mostly because I'm perhaps self conscious about it. I feel it necessary to make it known that whatever praises I receive are literally reflections of the success of those making note. It is impossible to do what any of us have done without the actions and support of our friends and Brothers. Wayne starts his piece with an over-the-top complimentary stance on my character, and I can assure you, I'm absolutely humbled by it. He continues on into what can only be described as  1 out of a thousand testaments to the brotherhood this Fraternity promulgates  In his closing statement, I can only say that the feeling is mutual. We are truly Brothers without Borders. We all can be... Read on. 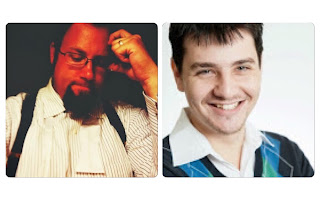 See that bloke pictured up above? He, ladies and gentlemen is Worshipful Brother Robert Johnson. One of the most intellectual, generous, genuine, kind, polite (I’m running out of adjectives) down to earth blokes I have ever met. As Robert is the editor of the Midnight Freemasons, I’m wondering how much of the previous sentence he’s left in.

I first contacted Robert on July 2012 via email (two and a half years before I was initiated.) I was just after some information regarding Freemasonry after I’d listened to his podcast ‘Whence Came You’. The next day he kindly responded to my queries. Two years later I contacted him again to let him know I was petitioning to become a Freemason and since then we’ve been in close contact, we’ve even on occasion sent each other gift parcels. Now one of the things, I believe, that makes our friendship special is that Robert lives in state of Illinois in America, where as I live in the state of Queensland in Australia. Not only do we not live in the same country, we don’t even live in the same hemisphere. Yet ignoring that barrier, through the spirit of our fraternity we are Brothers.

I believe in our fraternity that we are brothers without borders, I’ve heard so many stories of brothers going abroad, meeting fine masons and given warm hospitality at lodge. Some of those friendships last a lifetime I hear. That’s only on the proviso that you travel internationally or an international brother visits your lodge. For some lodges that isn’t a regular occurrence, especially for country town lodges. But what if there was a way for Brothers to meet other Brothers from different jurisdictions?

Social websites do create this, however it’s not a hundred percent safe. Some men could pose as regular masons when they are actually clandestine. I propose we create an online social network system just for Freemasons. Grand Lodge of each jurisdiction would be the only ones who to admit masons into this system, ensuring you’d only be talking to brothers in good standing. Brothers from all over the world, all you’d just need is a computer and maybe Google Translate. You could literally have masonic pen-pals all around the world, I think our elder brothers might appreciate that.

The friendship I have with Robert is unique and special to me. I can honestly say my masonic journey so far has been more enlightened than had it been if he weren’t there.

Brother Wayne Greenley is member of Mount Pleasant Lodge No. 361 and research lodge Barron Barnett Lodge No 146 both holding under the United Grand Lodge of Queensland. Currently he is studying a Bachelor of Laws (Honours) and a Bachelor of Business at QUT. In his spare time he likes to read, listen to music and research the Craft. He is looking forward to joining other orders when he’s permitted to in the next year and also to soon begin his journey through the progression of officers starting off with the Inner Guard.