Interview with the Grand Master of Queensland 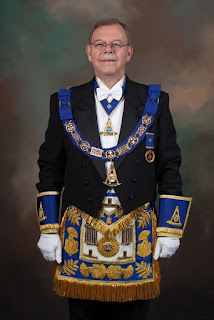 1. When were you first initiated?

I was initiated in June of 1973 in a small country lodge called Tibrogargan Lodge, number 305 UGLQ. I am still a member and I’ve been secretary for the past 22 years though I handed it over at the last installation and I am now the treasurer.

2. Why did you become a Freemason?

I joined because I was stationed at a forest research station at Beerwah. My next door neighbour had a BBQ and there I met a group of men from Beerwah that my neighbour knew, who wasn’t a freemason, but a number of these other men I met were Freemasons. Over the course of the next few months I got to know them, respect them, and I asked them about Freemasonry. Then I was in the lodge. (And now you’re the Grand Master, it’s been a good long journey) A 43 years long journey from today, sometimes one needs to cover a long period of time.

3. What are you favourite memories being in the lodge?

Without a shadow of a doubt it’s the mateship, the comradeship, the enjoyment of each other’s company, and especially that surrounding the new men into our craft.

4. If you could go back in time and witness any masonic event, what would you choose?

I would have liked to have been in Edinburgh in December of 1598 when William Schaw produced his first Statutes. (I do enjoy history and I look forward to reading the Schaw statutes). The three constitutions were present in Queensland from 1859 when the English came, 1863 when the Scots came and 1864 when the Irish came. For our 150 anniversary, we needed to do something very special. So the Librarian and myself decided to have in our presence the 1598 and 1599 statutes as they were delivered in Scottish brogue, a direct translation and a modern translation. I quote them quite often. Whilst my own lodge has an English background and I am familiar with the first premier lodge of 1717, I still if I was asked who do you think is supposed to be the father of Freemasonry, and I know that almost impossible to say, but for me the first person to put it on a map in a structured way was William Schaw.

5. How much of a difference do you feel you have made to Queensland Freemasonry?

Well I believe passionately that no-one person an affect change or achieve by himself. Thus in a team approach, I’ve had a very creative team around me and using their skills and expertise we have been able to introduce some structural changes. Importantly, thought, those structural changes have come associated with some significant constitutional change and that has been a significant change from the past. It was effected by communicating the need for change to our brethren. I went around the state with a campaign with ‘Organised Development equals change’ and the membership at large voted favourable for those changes.

6. What is your message to future Brothers?

The enjoyment of our fraternity and of your fellow Brothers. I sometimes highlight Freemason as three things. Mateship, Giving and Integrity. When you have a look at those three things and they are just a sort of modern way of expressing the old way of Brotherly Love, Relief and Truth but in a sort of Aussie way. They for me are the things that are most important, what we don’t involve in there are the real landmarks in order of our terms of belief of a supreme being. However, what they do say is that we are about good, doing good within ourselves, doing better for ourselves and by doing that we become better members our community, better members of our family, better members of the workplace. There is no doubt in my mind that Freemasonry is a great good for an individual and for our community.

Listen to the audio file for the bonus message the Most Worshipful Grand Master has for the world of Freemasons on an upcoming episode of "Whence Came You?"

Bro. Wayne Greenley is member of Mount Pleasant Lodge No. 361 and research lodge Barron Barnett Lodge No 146 both holding under the United Grand Lodge of Queensland. Currently he is studying a Bachelor of Laws (Honours) and a Bachelor of Business at QUT. In his spare time he likes to read, listen to music and research the Craft. He is looking forward to joining other orders when he’s permitted to in the next year and also to soon begin his journey through the progression of officers starting off with the Inner Guard.