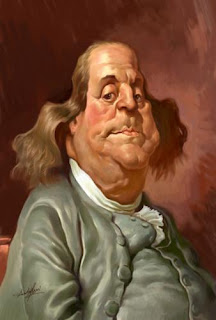 "Words may show a man's wit but actions his meaning."
~Benjamin Franklin
St. John's Lodge, Philadelphia, PA
As we go through our everyday lives, it's often hard to tell when a person is being sincere and when they aren't.  It's especially difficult right now as we head into another long, and ugly political campaign which candidates are being honest, and which are merely saying the things they believe their constituency wants to hear.
But Ben had it right--words mean very little.  If you want to know who a man is, or what he's likely to do in the future, judge him by the things he's done in the past.  We are creatures of habit, and what we have done before will give you a very good indication of what we're likely to do again (and if you don't believe me, just ask any of my high school teachers).
~TEC
I'd like to give special thanks to Judy Gordon for pointing out some really great quotes over the last few months.  I often borrow these from her Facebook page where she posts them on a regular basis.  Oddly enough, she has a really good collection of quotes that she gets them from--A Freemason Said That?  Great Quotes of Famous Freemasons.  That's right, it's my book.  So she borrows from my book, and I borrow them back from her Facebook page.  What a strange world we live in today.