"If I'm going to Hell, I'm going there playin' the piano."
~Jerry Lee Lewis
There are few musicians in history that have had more of an impact on music than Jerry Lee Lewis.  He was inducted into the Rock and Roll Hall of Fame in 1986, and in 2007, he was again honored with the Rock and Roll Hall of Fame's American Music Masters Award.  Jerry Lee developed a style that was all his own--in fact, he once said that America had only had three great American musical stylists--Al Jolson, Jimmie Rogers, and Jerry Lee Lewis (he was never shy about acknowledging his great talent). 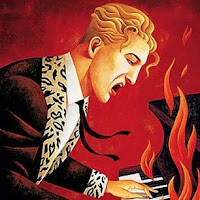 Between 1957 and his latest album Mean Old Man in 2010, he has had 47 singles and 22 albums in the top twenty.  He also hold ten gold records.
Jerry Lee is the last of a legendary group of musicians that came out of Sam Philips' Sun Records--the Million Dollar Quartet.  That group included Jerry Lee, Elvis Presley, Carl Perkins, and Johnny Cash.
Think real hard before you let Jerry Lee Lewis play your piano--he's kind of hard on them!