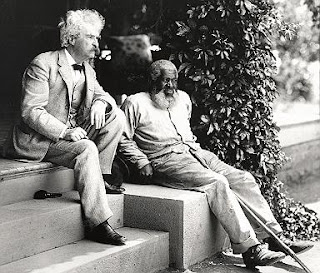 "When your friends begin to flatter you on how young you look, it's a sure sign you're getting old."
~Mark Twain
Polar Star Lodge No. 79
St. Louis, Missouri
We all get there, don't we? We wake up one morning and realize we're not as young as we once was.  Maybe it's that gray hair we find unexpectedly, or that high school reunion invitation in the mailbox that makes us stop and "do the math" to make sure it's really been that many years.  But it's a fact of life, and you either accept it, or begin a long struggle that you can't win.
Mark Twain knew something about growing older, but he also knew something about staying young.  It's all in your head.  If you start to think you're getting old, you are.  The fountain of youth springs between your two ears.  Getting old isn't about gray hair and aches and pains, it's about thinking yourself into the rocking chair.
Those that live life the most fully are the ones that don't accept a number as an indication of how they should act or feel.  Uncle Joe Cannon lived a long life, and often concerned his friends and family by not acting his age--like learning to ride a bicycle at an advanced age.  Ben Franklin said "Some men die at 25 and aren't buried until 75."
The secret to staying young?  Don't stop living.
~TEC
Quote excerpted from A Freemason Said That? edited by Todd E. Creason (2010) and available at online booksellers everywhere.