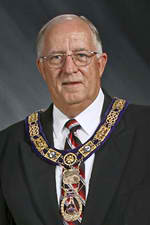 Grand Master Richard Swaney finished his term as Grand Master of Illinois over the weekend. I'd like to thank him on behalf of myself and fellow author Brian "Rooster" Cox for the opportunity of having a booth at Grand Lodge this year.  We had a blast, and it was a great opportunity for us to showcase our work, and talk to a lot of Masons about our books, about writing, and about publishing.  There are a lot of would-be authors out there, and I'm sure after this weekend, I'll be reading a few manuscripts over the next couple months. Ever since I published my first book in 2007, Our Grand Lodge of Illinois has been nothing but supportive of my books, and Grand Master Swaney in particular--in fact, if it weren't for them, and the appendant bodies of Freemasonry, I doubt anyone today would even know I wrote a book at all.  And that same consideration has been extended to Brian Cox, whose excellent novel Seven Knights was published earlier this year.  I have no doubt we'll see Brian's book one day on the big screen. That's the wonderful thing about Freemasonry--it doesn't matter what you want to do or what you're good at, they'll find a way for you to use it, and you are going to find all the help you'll ever need in doing it.  Thank you!
﻿
We did have fun.  It was said our corner table in the foyer was the noisiest one there--in the entire 172 year history of the Illinois Grand Lodge.  And I have to believe that--there were a couple guys there who were in attendance at that first meeting. Our booth served not only as the writer's area, but also as a daycare center, a place you could leave a hat or apron case, and a gathering place for some of Illinois' most entertaining members (at least they thought so).  I'd like to thank Judy Gordon in particular for bringing over so many people for Rooster and I to meet. And William J. Hussey for taking on the role of carnival barker for our booth.  I do want to make it very clear he is not a paid employee or representive of either author, and regardless of his repeated claims, the cup Rooster's business cards were in wasn't actually the silver chalice of Richard the Lion Hearted and the pen we were signing books with didn't actually belong to Mark Twain.  Thanks to an unfortunate misspelling on the sign marking our booth Friday morning, we repeatedly heard his booming voice announce throughout the foyer "come over here and meet my favorite arthurs!"  He worked cheap though.  He worked both days for a bag of peanut M&M's (well, half a bag. I found them in the men's room).  But he did such a good job, we tipped him. We gave him a pen that once belonged to Mark Twain, but only after he carried all the books to the car, paid our parking, picked up and paid for our sandwiches, and drove the cars around to the door. 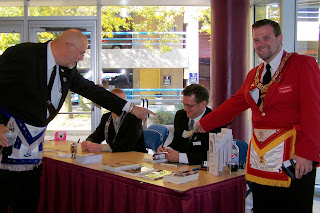 Unfortunately, a few Masonic secrets were inadvertently revealed.  I hope I don't get into trouble for this. If you look at the photograph carefully you'll see something few Freemasons have ever seen--in fact it's been an object of myth and legend.  You've probably seen shows about it on History Channel or Discovery. That's right, clutched tightly in his hand, is the wallet of Sean McBride.  He was a little annoyed when he had to pay cash for our books--we don't accept Royal Arch chapter pennies as currency. As you can see, the appearance of such a mythic relic cause quite a stir with some of the most senior members of our fraternity. Truly a remarkable moment captured on film.
﻿
It was also really fun for Brian and I when our wives and the kids joined us this afternoon for the last couple hours.  The girls had their own coloring station (prime real estate across from the York Rite).  The girls had a great time sitting at their own table.  It was a very fun weekend for all of us.  Thanks again to Our Grand Lodge of Illinois and Past Grand Master Richard Swaney for setting this up for us.