Ronald Reagan: Freemason Or Not?

﻿"Going to college offered me the chance to play
football for four more years."
~Ronald Reagan 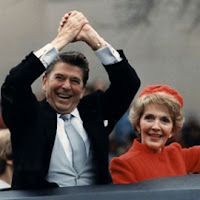 ﻿Over Ronald Reagan's long career as both an actor and a politician, he had been involved with events and charitable causes supported by Freemasonry and the Shriners.  He is often listed as a Freemason, or a member of the Shrine.  Now Freemasons thought a great deal of Ronald Reagan without question, but President Reagan was never a Freemason himself.
Now here's where people get confused.  On February 11, 1988, the Grand Master of Washington, D.C. presented President Reagan with a "Certificate of Honor" which said that President Reagan's life was a testament to his firm belief in brotherly love, relief, and truth, and his service to the public has broadened the applications of temperance, fortitude, prudence, and justice to the benefit of all mankind. But the certificate was given to Reagan to acknowledge his life's work--he was not made a Mason by the Grand Master of Washington, D.C.

﻿﻿
﻿﻿ A little later, both the Scottish Rite and Shriners followed suit and honored Reagan for his contributions.  The two Scottish Rite Grand Commanders (Northern Jurisdiction and Southern Jurisdiction) jointly gave President Reagan a Scottish Rite Certificate, and the Imperial Potentate gave him a Shrine certificate giving him "honorary membership" in both organizations--but again, he was not made a Mason.