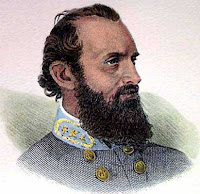 "Duty is ours; consequences are God's."
~Thomas "Stonewall" Jackson
Confederate General Thomas "Stonewall" Jackson (1824-1863) lost his arm in a battle at Chancellorsville, when Jackson and his staff were returning to camp and were mistaken for a Union Calvary division.  Jackson's chaplain, conducted a funeral for his arm, with full military honors, and buried it where it remains today.  But Jackson's wound ultimately proved fatal, and he died several days later and was buried in Lexington, Virginia--more than a hundred miles from his arm.

As one of the most successful and popular Confederate generals, his death was a serious setback for the Confederacy, not only from the standpoint of its military ability, but it also deeply affected the morale of the Rebel Army and supporters of the southern cause.
It is likely Stonewall Jackson was a Freemason based on correspondence, actions and eyewitness reports.  It has long been speculated that he may have been a member of a traveling military Lodge, but no records exist to confirm the fact. It's unlikley we'll ever know for sure.
~TEC