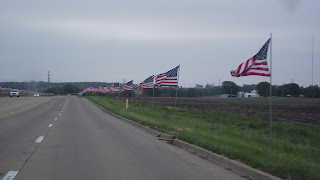 "Wars are not paid for in wartime, the bill comes later."
~Benjamin Franklin 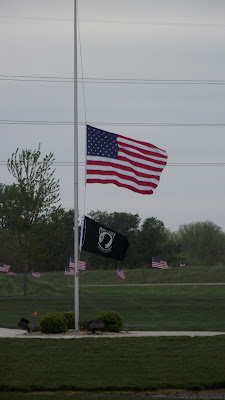 The benefit was the conclusion of a full day of events that included a 5k run/walk at Coal Miners Park in Pekin and a memorial motorcycle ride around the area. The actual benefit consisted of a Pekin Community High School Army Junior Reserve Officer Training Corps memorial presentation, live music, a silent auction and raffles, spaghetti dinner and the Illinois Patriot Guard Fallen Heroes Traveling Memorial Wall.

The benefit began with a POW/MIA presentation by the PCHS JROTC. Both Bastean and Shaffer were members of the JROTC program while attending PCHS. A dinner table set for five was the center of the display and represented those missing or killed in combat and their sacrifice. At the conclusion of the presentation, the JROTC played a song called “Soldiers of the Clouds” by ‘Doc’ Gill that appeared to bring out great emotion,  and even tears, from the crowd.

“This day is to remember the veterans and not let those who have fallen pass from our memory. This hits home — I’ve seen too many of these. For me to do something to honor the fallen, that’s just what I do,” said retired U.S. Army Sergeant John Stoor, who organized the memorial motorcycle ride that preceded the benefit.

Judy Gordon considers herself a York Rite Child. She's very active in Job's Daughters. She's the Past Honored Queen, and Bethel Guardian of Bethel No. 55, Pekin (IL). She received the Cryptic Masons Masonic Youth Leadership Award along with her husband, Ray Gordon in July 2007. She's also Past Matron of the Morton Chapter No. 974 (IL) of the Order of the Eastern Star and Historian of the Emblem Club No. 424 of Pekin (IL).