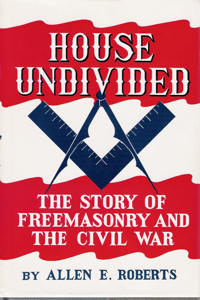 What an amazing book.  The House Undivided – The Story of Freemasonry and The Civil War by Allen E. Roberts showcases the history of Freemasonry throughout the Civil War.  Even as unbelievable and as unspeakable the horrors of war are, you feel proud reading about how Freemasons fighting the Civil War conducted themselves.
Two examples are a showcased.  In one, a Northern ship needed to dock in a southern port for a Brother who had passed away. The Southerns granted them an escort to the Masonic Lodge for a service and burial and allowed safe transport back to the ship--becasue they were Masons.

Another story took place as a town was being sacked and looted.  A woman ran outside her home and screamed the hailing sign, and an officer on horseback put four of his men on the four corners of her house and guarded it against being looted.

The honor that we hold as brothers continues today, but to really understand how the standards were applied in the past, check out this book. I was shown the book by a PM who was Senior Deacon when I was Raised. He is a civil War researcher and reenactor. So my thanks to him!
~SKRJ
Robert Johnson is a Freemason out of the First North-East District of Illinois. He belongs to Waukegan Lodge No. 78. He is also a member of the York Rite bodies Royal Arch, Cryptic Council and Knights Templar. Brother Johnson currently produces and hosts a weekly Podcast (internet radio program) Whence Came You? which focuses on topics relating to Freemasonry. In addition, he produces video shorts focusing on driving interest in the Fraternity and writes original Masonic papers from time to time. He is a husband and father of three. He works full time in the safety industry and is also a photographer on the side as well as an avid home brewer. He is also working on two books, one is of a Masonic nature.