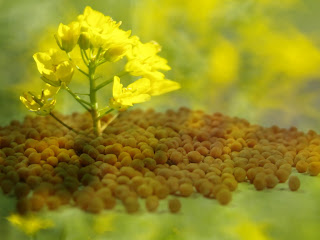 “Put your trust in the Lord and go ahead. Worry gets you no place...”
~Roy Acuff
East Nashville Lodge No. 560, Tennessee
In the first Epoch of the Job’s Daughters initiation, the Pilgrims are taught to "remain faithful to God in our every thought, word and act, no matter what earthly trials they may be called upon to endure." The Pilgrims are taught about Job and his faith in God. Faith is an important lesson to be learned. Job learned in his hour of trial when all the world seemed to forsake him, he remained God’s faithful servant.
I’ve always loved the parable about the mustard seed. It’s so simple and yet so profound. A mustard seed is a speck, one of the tiniest seeds in the whole world. And yet, look at what it can become if we only believe. Jesus told his apostles, when they asked him to increase their faith, that they didn’t need a large amount of faith. A mustard seed size would do. What Jesus was trying to tell them in this parable is that it doesn’t take great faith to produce great results. The results don’t depend on us; they depend on God. Have faith that God will give you what you need to move mountains and uproot trees.
Have faith in yourself…believe in yourself…YOU can move mountains.


Judy Gordon considers herself a York Rite Child. She's very active in Job's Daughters. She's the Past Honored Queen, and Bethel Guardian of Bethel No. 55, Pekin (IL). She received the Cryptic Masons Masonic Youth Leadership Award along with her husband, Ray Gordon in July 2007. She's also Past Matron of the Morton Chapter No. 974 (IL) of the Order of the Eastern Star and Historian of the Emblem Club No. 424 of Pekin (IL) Ray and Judy have two (soon to be three) grandkids, and a very spoiled dog, Reggie (who incidentally volunteers as a Therapy Dog at local hospitals and nursing homes.)