by Midnight Freemasons Regular Contributor
Michael H. Shirley
It’s just dawning outside, the dogs are quiet, and the kids are still asleep. My wife and I are drinking coffee, resting a bit before throwing the last few things in the van, save the kids, and heading north for our annual vacation to Wisconsin’s north woods. We’re going to YMCA Family Camp Nawakwa, on Big Crooked Lake. My family’s been going there on and off since 1967, when my mother, up too late, won a week’s stay there for thirty-five dollars in the Channel 11 auction. Actually, she came in second, but the guy who won couldn’t go, so we loaded up the station wagon and drove north, where we fished, swam, canoed, and generally had a wonderful time. We kept going back every year until my siblings and I were grown and busy. Truth to tell, the camp had gotten shabby in those last years, and we were too old to overlook it. We moved on. 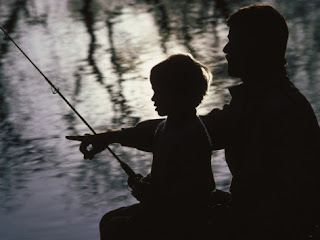 In 2005, my brother, sister, and I were looking for a way to celebrate our parents' fiftieth wedding anniversary, and discovered the camp was still in business and had been fixed up nicely, so we booked a week there in June. With parents, kids, grand kids, outliers, and attendants, we swarmed into camp, dispersed, unpacked, and met for dinner at our parents' cabin. We talked, and laughed, and listened. And were transported. It was then and there, sitting at the campfire on that first night back, that I discovered it was possible to become a child again if you have a child of your own. Watching my son, then five,  discover the lake and the trees and the fish and the quiet, as I had nearly forty years before, was to become both my father and my young self. Teaching him to fish, as my father had taught me, made me realize that I could only hold on to the past by living in the present.
And here we are again, the kids awake and eager, the van over-packed as usual, ready for the nine-hour drive. Things are different now, with Wi-Fi at the lodge and bathrooms in the cabins, but the lake will be the same, and the memories my children create will be their own, as mine are mine.
My father's gone now, but he is still in this place, his spirit and my memories of him alive in my children's joy.
~MHS
W.B. Michael H. Shirley is Past Master of Tuscola Lodge No. 332 and Leadership Development Chairman for the Grand Lodge of Illinois. He's also a member of the Illinois Lodge of Research, the Scottish Rite, the York Rite, Eastern Star, and the Tall Cedars of Lebanon. He's also a member of the newly-chartered, Illini High Twelve No. 768 in Urbana-Champaign. The author of several articles on British history, he teaches at Eastern Illinois University.