John Wayne (as J.B. Books) "You ain't kilt, but your gonna have a bellyache all winter, ya boob."

You ask any John Wayne fan who his favorite co-star was, and just about everyone will agree it was Maureen O'Hara.  He said it himself, and they made five movies together--one of my favorites is McLintock (1962), one of the only comedies he made.  They were terrific together. But there was another who also made five movies with John Wayne, an actor the Duke had great respect for and asked for by name.  His name was Dollor, and he was a big sorrel with a white blaze on his face, and white stockings.  John Wayne and Dollor were also terrific together.

It would surprise most people, but John Wayne wasn't that passionate about horses. He was a good rider, and he knew his way around horses, but he saw horses as an essential part of his on scene personality.  He was a big man, and he liked tall horses that were dependable, predictable (lots of gun fire), and reliable on the film set.  And there were certain types he knew he looked good riding on screen.  Dollor fit all the things Wayne looked for in a horse perfectly when they first worked together on True Grit (1969).  So fond of that horse, John Wayne drew up exclusive movies rights on Dollor that said in no uncertain terms that nobody rode Dollor on film but John Wayne.  He went on to ride Dollor in the last four Westerns he made, including his last film, The Shootist. 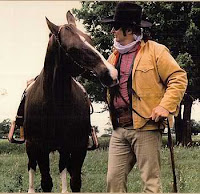 Perhaps one of John Wayne's most iconic scenes with Dollor was the showdown at the end of True Grit--the role that won John Wayne his Oscar.  You know the one.  One of the greatest Western showdowns in screen history. "I mean to kill you in one minute, Ned.  Or see you hanged in Fort Smith at Judge Parker's convenience.  Which'll it be?"  Ned Pepper calls back, "I call that bold talk from a one-eyed fat man."  That leads to one of the greatest lines ever delivered on screen.  "Fill your hands you son of a . . ."  Well, you know how it goes.  Guns blaze as they charge each other.  John Wayne spin cocking his rifle (the same way he had decades earlier in 1939's Stagecoach) as he blasted away with his Colt .45.  Dollor falls in battle, but John Wayne comes out on top--with the help of his friends.

Wayne was so fond of Dollor, he had the screenwriter of The Shootist rewrite the script so that Dollor could be mentioned by name--in fact, little Ron Howard got in a little jam with J. B. Books in the film over Dollor.  John Wayne died in 1979.  Dollor went on to star in a couple more movies after the Duke's death, and finally lived out his remaining days on a ranch near Dallas, Texas.  Dollor lived a long life, and died in 1995.

In case you couldn't tell, I'm a huge John Wayne fan.  People often ask me what the first chapter I wrote in the Famous American Freemasons series was.  It was Bro. John Wayne.  If you're a John Wayne fan, this would be a good time to visit your local magazine stand.  American Cowboy Magazine has a collector's edition out that features John Wayne--100 beautifully illustrated pages.  I got the essential facts for this piece about Dollor out of that collector's edition, and it's just crammed full of great articles about "The Duke." A life-long fan, I found a lot of interesting details I didn't know.  It will only be available until September, so you better go look for it today.


Todd E. Creason, 33° is the author of several books including the Famous American Freemasons series (in which John Wayne is included).  Todd is the Past Master of Ogden Lodge No. 754 (IL), and a member of both the Scottish Rite, and York Rite. He's also a member of the Ansar Shrine (IL) and Charter President of the Illini High Twelve in Champaign-Urbana (IL).