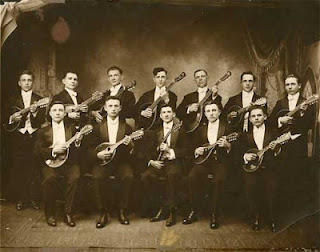 The story of the Master Mason Mandolin’s journey from concept to completion needs an atlas. Brother Joe Hardwick and I have lived and breathed bluegrass music for most of our lives, so it’s easy for us to forget most people don’t know what we’re talking about. For the benefit of readers, our families, and random strangers, here’s an introduction to mandolins, bluegrass, and various random facts as they occur to me.

The mandolin is an old instrument, evolving from the lute family during the seventeenth and eighteenth centuries, but its modern form emerged in the nineteenth century, and it was the Gibson Company that most effectively manufactured it and with which it is still most popularly associated. It has four pairs of strings, tuned GDAE, like a violin, and in the first part of the twentieth century was a mainstay of dance bands and mandolin orchestras. The Gibson Company marketed their mandolins aggressively, both their A series, in a teardrop shape, and their fancier F series, with scrolls and points, and oval or f-shaped soundholes, with the F5 standing at the top of the heap as the fanciest and most expensive of them all.

The 1920s and early 1930s are generally thought of as the golden age of American mandolin manufacturing, with the best those F5s produced under the guidance of Lloyd Loar, a sound engineer and master luthier for Gibson from 1919 to 1924. He’s credited with introducing f holes to the top of the mandolin (like a violin’s), a floating fingerboard, and longer neck. Of the many F5s produced under his supervision, some 300 sounded good enough to warrant his signature. About 225 Loar-signed F5s are known today, and command prices in excess of $200,000 on the rare occasions they come on the market. The Gibson F5 became the mandolin to play, and now “F5” refers to any mandolin made to look like the original Gibson, rather than a Gibson itself.

How mandolins came to be so closely associated with bluegrass music, why Loar-signed F5s are so expensive, and why I wanted my own F5 so badly are all stories for my next post.

This is the second installment of Michael Shirley's Mandolin Series.  To be continued . . .