Masonic Values: The Friend To Friend Monument at Gettysburg 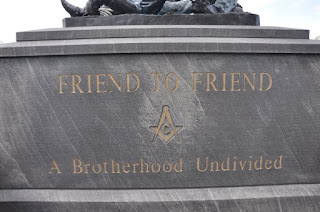 The 26th Degree in the Ancient Accepted Scottish Rite Northern Masonic Jurisdiction, “The Civil War Degree” is one of the most stirring degrees portrayed by our Valleys. It tells a compelling story that all Masons can find useful and is described as this:

“This degree teaches the quality of mercy; that it is a spirit of compassion and a tenderness of heart which dispose us to overlook differences between people."

Through an inspirational drama, this degree teaches that people with similar goals may have differing points of view and that respect should be given to the opinions of others.” 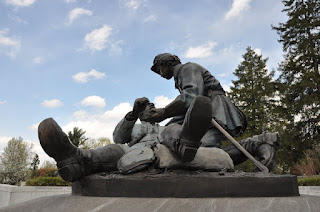 The 150th anniversary of the U.S. Civil war is underway. The Civil War is by any measure one of the darkest times in American history. This was a conflict of North versus South, brother versus brother and friend versus friend.

In 1993, the Grand Lodge of Pennsylvania commemorated the Battle of Gettysburg with a monument called “Friend to Friend - A Brotherhood Undivided.” 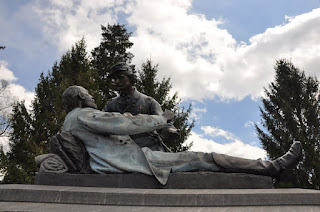 Armistead was severely wounded at Cemetery Ridge at Gettysburg. Bingham heard Armistead’s cries for help and came to his aid. Bingham worked for Union General Winfield Scott Hancock who was a close friend of Armistead’s before the Civil War broke out. Armistead told Bingham of his close relationship with Hancock and entrusted Bingham with his personal effects to deliver to Hancock.

The statue illustrates Armistead giving Bingham his watch, but more importantly demonstrates that Masonic value of brotherly love. Even in the darkest hours, brothers found their trust in one another.

If you visit Gettysburg, take time to visit this memorial. It is located in the Gettysburg National Cemetery annex. This memorial is the only one in the National Park Service system that was designed, built and maintained by a private organization - the Grand Lodge of Free and Accepted Masons of Pennsylvania.