A Craftsman's Journey: Part I


This article is the first in Michael Shirley's mandolin series

One of the hard things about moving to a new town is finding people who can fix the shaky house you’ve bought. Sometimes, though, you get lucky. When we moved to Tuscola, Illinois, in 2002, I had bookshelves to attach to the wall. Since I wanted them to hold the books and stay upright, I figured I needed someone to put them up who knew what he was doing. I found Joe Hardwick through a friend’s recommendation, and he’s been keeping my house standing upright, dry, and in decent shape ever since. Joe’s a master carpenter, electrician, roofer, and one of the smartest and most honest guys I know. Since last year, he’s been a Master Mason in my lodge, Tuscola No. 332, A.F. & A.M., where he is now our Marshall; he’s also a Scottish Rite Mason in the Valley of Danville, and one of my best friends. 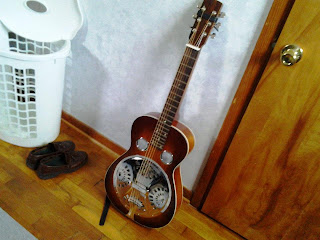 I’m worried, though, since Joe’s going through a transition, and he might not be available to keep my house from falling down for much longer. You see, since he was a kid, music has been at the center of his life. He’s played in bands for years, and he’s been repairing instruments since he was sixteen; now he’s decided to make them, and to make the move from carpenter to luthier. Two years ago, he built his brother Wayne a Dobro, and then made himself an F-model mandolin. He thought it sounded pretty good, but Joe tends to measure twice and cut once, so he took it with him to a bluegrass festival and asked Danny Roberts, the mandolin player for the Grascals, to tell him what he thought of it. Danny used to be the mandolin department manager for Gibson USA, and is widely considered one of the best pickers alive. “This is your first one?” he said. “Wow.” He had some tips, but the most important one was “keep making them.” That was advice he decided to take.

Now, I’ve been a musician for a long time, and I had a great mandolin, an early Flatiron A-52, but I’d always wanted an F model. Joe liked my Flatiron, so we made a deal: he’d make me an F model, the first Hardwick Custom, in exchange for my mandolin. I figured that that way, if the house ever fell down because he was too busy with his luthier business, I’d have a good instrument to play to accompany the destruction. Besides, the idea of having a mandolin made to my specifications was exciting. I had no idea where it would take both of us.

Michael H. Shirley is Past Master of Tuscola Lodge No. 332 and Leadership Development Chairman for the Grand Lodge of Illinois. He's also a member of the Illinois Lodge of Research, the Scottish Rite, the York Rite, Eastern Star, and the Tall Cedars of Lebanon. He's also a member of the newly-chartered, Illini High Twelve No. 768 in Urbana-Champaign. The author of several articles on British history, he teaches at Eastern Illinois University.