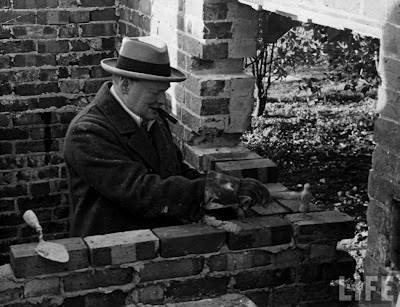 Freemasons rightly claim Winston Churchill as one of their own. He was initiated as an Entered Apprentice in Studholme Lodge 1591 on May 24, 1901, passed to the degree of Fellowcraft on July 19, 1901, and raised to the sublime degree of Master Mason on March 5, 1902. And that was that. Like many other men, Churchill’s involvement in the Craft effectively ended with his raising. He continued to identify himself as a Freemason when asked or when it seemed warranted, but he was too busy to do more than see it as a social membership, much like his membership in the National Independent Order of Odd Fellows and in the Ancient Order of Druids.

He took much greater pride in being a card-carrying member of the Amalgamated Union of Building Workers as a bricklayer. As any visitor to his home at Chartwell can testify, Churchill was a dab hand at laying bricks. He appears to have preferred operative to speculative masonry. Either way, he was a Mason.