A Visit To Island City Lodge No. 330, Wisconsin

I don’t travel much outside of Illinois except for day trips, and so don’t often get to go to lodge meetings in other jurisdictions, but every year my family vacations in northern Wisconsin, near Minocqua, and every year we drive by Island City Lodge No. 330, F&AM, on the way into town. Their stated meeting is at 10 am on the first Wednesday of the month, and this year marked the first time since I became a Mason that it occurred while I was there. The day before I e-mailed the contact address on the Grand Lodge website and received a very welcoming reply from the lodge Chaplain, W. Bro. Darrell Tarnow. The next morning, dues card in hand, I presented myself to the Tyler, Bro. Dick Hansen, and was warmly received by the many Brothers already there. After a quick tour by W. Bro. Al Jurgens, another native Illinoisan, I sat myself in the North, suitably clothed. 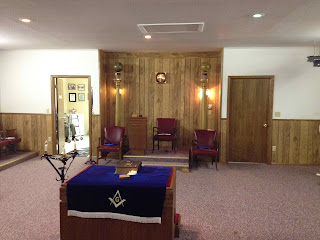 Wisconsin ritual is, to put it mildly, different than Illinois'. It's also quite serious and impressive. The rod work is different, the opening prayer is different, the opening and closing rituals are different, and it was all different enough that it took me a while to realize the Worshipful Master wasn't wearing a hat. It seems they're optional. Did I mention it was different? But it was also the same: fraternal, serious, fun, and thoroughly Masonic. One of the things that made it so much fun is the composition of the lodge: many of the members are originally from other jurisdictions and have retired to the north woods, where they are in the position of learning new ritual after a lifetime of Masonry. They take the work seriously, but not themselves. So mote it be for all of us.

After the stated meeting, I got a chance to learn a bit about the lodge’s history. Minocqua Lodge No. 330 had ceased to exist in 1982, merging with Rhinelander Lodge No. 242, but in the 1990s a group of Minocqua Masons decided to organize a new lodge, receiving their charter as Island City Lodge No. 330 in 1998. They took Minocqua Lodge’s old number and much of the furnishings, moving to the building outside of town that first caught my eye four years ago. 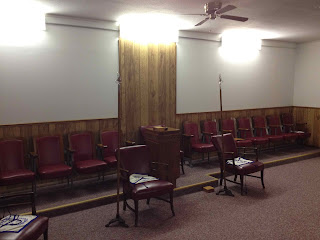 Island City Lodge is an active and welcoming lodge in every way, and I’m grateful to have found it. The Brothers invited me back for breakfast the next week (served every Wednesday when there's not a stated meeting), and I made sure to be there. It was a great way to wind up my vacation.

Masonic fellowship is a wonderful thing, and I try never to miss an opportunity for it, especially when it involves meeting new friends and Brothers. Family vacations, as I've now learned, present a great chance to expand my Masonic horizons.  It just takes some planning. I’ve already checked my calendar, and if you’re in northern Wisconsin on Wednesday, June 5, 2013, at 10 am, come by the lodge building on State Highway 51 just south of Minocqua. I’ll be sitting somewhere on the sidelines, suitably clothed.