The Words And Wisdom of Winston Churchill 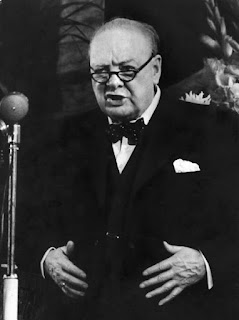 Winston Churchill quotations never seem to lose popularity, whether he said them or not. Certainly, a man who wrote for a living for over sixty years, whose political speeches fill many bound volumes, and who won the Nobel Prize for Literature seems likely to have said a few things worth savoring, including “It is a good thing for an uneducated man to read books of quotations.” I enjoy many of them, from the serious (“Never in the field of human conflict was so much owed by so many to so few”) to the humorous (“He has all of the virtues I dislike and none of the vices I admire”). The reader can learn something from all of them, if only how to write a proper English sentence. Of all of them, however, I find one to be the most useful: “When you’re going through hell, keep going.” He was right. To do otherwise is to make the choice to believe that nothing will ever improve, and that one might as well just sit down in the flames and roast.

Churchill faced that choice in May 1940 when he became Prime Minister. Some of his ministers, Lord Halifax chief among them, argued that Britain ought to pursue a peace treaty with Hitler. Churchill did not believe that, for he understood that a deal with the Devil never leads to Heaven. Appropriately, it was his rhetoric that won the day, as he inspired the nation and the Parliament to continue the fight. Let an excerpt from perhaps his most famous speech, delivered to the House of Commons on June 18, 1940, serve to illustrate: 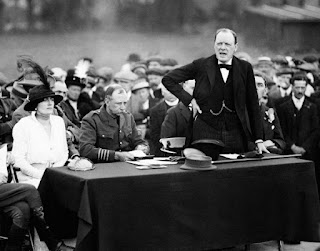 "What General Weygand called the Battle of France is over. I expect that the Battle of Britain is about to begin. Upon this battle depends the survival of Christian civilization. Upon it depends our own British life and the long continuity of our institutions and our Empire. The whole fury and might of the enemy must very soon be turned on us now. Hitler knows that he will have to break us in this island or lose the war. If we can stand up to him, all Europe may be free and the life of the world may move forward into broad, sunlit uplands. But if we fail, then the whole world, including the United States, including all that we have known and cared for, will sink into the abyss of a new Dark Age, made more sinister, and perhaps more protracted, by the lights of perverted science. Let us therefore brace ourselves to our duties, and so bear ourselves that, if the British Empire and its Commonwealth last for a thousand years, men will say, "This was their finest hour."

So mote it be.

~W.B. Michael H. Shirley is Past Master of Tuscola Lodge No. 332 and Leadership Development Chairman for the Grand Lodge of Illinois. He's also a member of the Illinois Lodge of Research, the Scottish Rite, the York Rite, Eastern Star, and the Tall Cedars of Lebanon. He's also a member of the newly-chartered, Illini High Twelve No. 768 in Urbana-Champaign. The author of several articles on British history, he teaches at Eastern Illinois University.