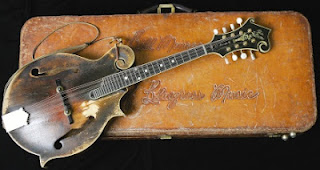 That mandolins in general, and the F5 in particular, are associated today primarily with bluegrass music is due entirely to one man: Bill Monroe, the Father of Bluegrass Music, and a member of both the Country Music and Rock and Roll Halls of Fame. Monroe, who was born in rural Kentucky in 1911, had been a professional musician with his brothers since 1929, eventually striking out on his own in 1938, working through several musicians before forming the Blue Grass Boys and landing a spot on the Grand Ole Opry in 1939. With an instrumental lineup of mandolin, guitar, bass, banjo, and fiddle, the Blue Grass Boys were still a country string band, because the style of music they played was less bluesy and driving than it would become. It wasn’t until December 1945, when Monroe hired Earl Scruggs on banjo, that the bluegrass sound came together. Characterized by tight harmonies, driving rhythms, instrumental breaks on mandolin, banjo, and fiddle, and a blues-inflected sound throughout, the Blue Grass Boys lineup of Monroe, Scruggs, Lester Flatt (guitar and vocals), Chubby Wise (fiddle), and Howard Watts (bass) are seen in retrospect as having created a new form of American music. As bluegrass and country legend (and former mandolin prodigy) Ricky Skaggs put it, “I think Bill Monroe's importance to American music is as important as someone like Robert Johnson was to blues, or Louis Armstrong. He was so influential: I think he's probably the only musician that had a whole style of music named after his band.” 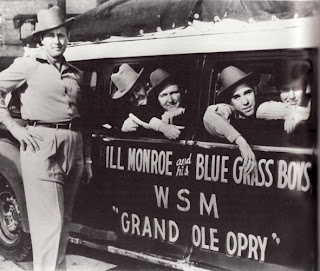 True enough. He also inspired generations of musicians to pick up the mandolin, and is arguably entirely responsible for the outrageous price of a Lloyd Loar signed F5. Monroe picked up his 1923 Loar-signed F5 at a Florida barbershop in 1941 for $150 and played it for the rest of his career. It now holds a place of honor in the Country Music Hall of Fame. Were it ever offered for sale, it would likely fetch between one and two million dollars. It is the patient zero of the bluegrass mandolin epidemic.  Everybody who picks wants an F5.

And so did I, although my mandolin chops have rusted over the years. So when Joe Hardwick agreed to make me a Hardwick F5 to my specifications, I was more than a little excited. Some points were easy to figure out: classic look, no outlandish color, no block fingerboard inlays. But what else? What would the headstock inlay be? We had no idea, but figured a look on the internet might give us some clarity. It did.

This is the third installment of Michael Shirley's Mandolin Series.  To be continued….