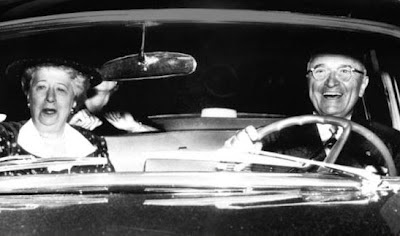 I’m a history teacher by profession, and a dreamer by inclination, so I sometimes find myself musing on what things looked like in the past. I enjoy paging through books like Lost Chicago or England Then and Now, but I prefer to look at things in person, picturing them as they might have been decades earlier.  It doesn’t much matter what it is. I’ll stare at a building, imagining the businesses that were there in the 1920s, or looking at a field and seeing the resort that closed there in the 1950s. I think of the people who lived their lives there, went to work every day, made friends, helped customers, and did all the prosaic things we do, in a place no longer standing. I picture farmers in the early twentieth century driving along back roads that finally join up with the state highway south of town, and turning north on Main Street to go downtown for a cup of coffee. It doesn’t take much of great moment to get me imagining these real things.

And so it is that I find myself sitting in my car at a red light, about to turn left from Main Street onto Highway 36, looking for a car headed west on June 20, 1953. Six months after they left the White House, Harry and Bess Truman were on a road trip to Washington, DC, unaccompanied, in their new Chrysler New Yorker. They stayed in motels and with friends, eating at diners along the way, recapturing some of the freedom they’d enjoyed before Harry had become president. There was no way to get it all back, of course. He was recognized wherever he went, stopped to give autographs, and truth be told enjoyed the attention. Bess didn’t so much, but she’d been married to him a long time, and knew it was all part of the package. Besides, they had privacy in the car, driving along and enjoying the feeling of being just another couple out on the road. They stayed in Indianapolis at a friend’s house, stopped in Philadelphia, Pennsylvania, where Harry gave a speech, and took the train from Washington to New York to visit their daughter, Margaret. But for long stretches they were alone, as happy a married couple as ever was, enjoying the scenery, with Bess telling Harry to slow down, because Harry always liked to drive fast, and he hadn’t driven much for a long time.

And so I like to imagine them, driving past my town, seeing the Cooper Motel and the township cemetery on their left. Harry noticed them, I’m sure, because Harry noticed everything. Then the light changes and I turn left, following them, my wife telling me to slow down.

Note: The car Harry and Bess took on their road trip was a 1953 Chrysler New Yorker. It eventually left his hands (he was never one to keep a car for long) and was eventually bought by a Kansas car enthusiast named Bob Creason, who kept it in his barn. Todd is sure he must be a relative.