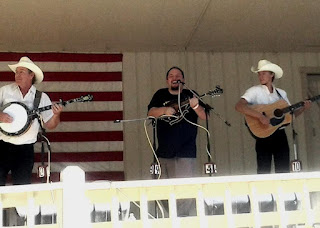 I’d been waiting for a week for the Master Mason Mandolin to get used to being strung. Work had gotten pressing, and I had put the wait mostly out of my mind, when Joe called and said, “Want to play it?”

His house is about five minutes away, and I made it in three. As I walked in the door, he handed me what I now knew was the last mandolin I’d ever own. It looked vintage, but new, which was exactly what we both wanted. I’d had a strap custom made by Bill Bailey (really) of The Bailey Strap Company, and so I put it on and started trying to remember how to play.

The action was perfect, the volume louder than a new mandolin has a right to, and the tone like a beautiful wooden bell. What amazed me was how playable it was. The neck was perfect, with a slight arch to the fingerboard, and the strings were perfectly spaced. It was wonderful. But it wasn’t quite mine yet. Joe had a trip to make the next day: to Uncle Pen Days, a six-day bluegrass festival at Bean Blossom, Indiana. I’d told Joe he needed to market his skills, and the best evidence he had of those skills was the mandolin I was holding. So I handed it back and said goodnight.

The next evening he texted me: “Your mando is being played on stage right now.” It turned out that Travers Chandler, an excellent player whose band, Avery County, plays traditional bluegrass, was playing that day for James King. Joe showed him the mandolin, and Travers played it a bit. “Mind if I play it on stage?” he said. Joe didn’t mind at all, and the Master Mason Mandolin turned professional. At the end of the set, Travers said to the crowd, “This beautiful mandolin I’m playing was made by Joey Hardwick, who’s sitting right in front of me.”

I’m not sure it gets better than that. To judge from the picture Joe took, Travers enjoyed himself. And the festival was only one day old.

This is the fourteenth installment in Michael Shirley's Mandolin Series.  To be continued...