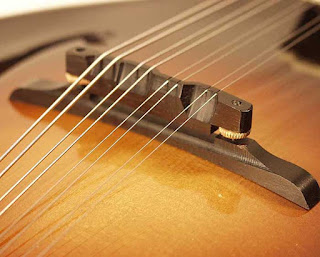 If you recall hating geometry in high school, didn’t do very well at it, and wondered what use it could ever be in “real life,” don’t try building instruments. Joe Hardwick had pitched the angle of the neck on the Master Mason’s mandolin a bit more than normal in order to make it louder, but he had to be careful, since by doing so he also increased the pressure on the bridge and thus on the top of the mandolin itself, which made a break more likely. I asked him what effect changing the neck angle had. “Well, “ he said, citing luthier Roger Siminoff, “the down pressure at 16° string break angle was 45.5 pounds. As the break angle increased two degrees to 18°, the down pressure increases almost 10 pounds. At 20° the load increased almost 50% to 62 pounds. Small changes in neck pitch radically affect the string break angle. A change of one degree (1°) in neck pitch will change the bridge height by .210" and the string break angle by 4°. As a result, the change from a 6° to 7° neck pitch angle could increase the down pressure of the bridge on a mandolin soundboard by as much as 17 pounds.” I’m glad he understands what he’s doing, because the result is a mandolin that is loud and woody. Now that he had adjusted the bridge to the proper height and the neck curve to create a constant string height, all that was left to do was wait for the mandolin to get used to the setup. And so we both waited….

This is the 13th installment in Michael H. Shirley's Mandolin Series.  To be continued . . .