Book Announcement: A Shot After Midnight 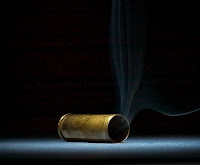 Best-selling author Levi Garvey and his new wife Tori, first introduced in Todd E. Creason’s debut novel One Last Shot, are back, along with a few other familiar faces. It’s been nearly two years since Levi and Tori’s deadly encounter with Twin Rivers Chief of Police, Doug Malone, and life in the small town of Twin Rivers has returned to its usual quiet pace. But it’s not to last.
On a clear and quiet spring night, a single shot echoes across the town of Twin Rivers. It’s not long before the body of Andy Miller is found dead in his living room. Shot through a window at long range with a high-powered rifle. Andy Miller had been released that day from prison after serving 38 years. He was imprisoned for his involvement in the 1973 armed robbery of the First National Bank of Calloway, where a police officer was brutally gunned down.
Fraught with twists and turns, A Shot After Midnight is a riveting sequel to One Last Shot that readers will find impossible to put down until the last page.
Todd E. Creason's A Shot After Midnight will be available from Moon & Son Publishing at major booksellers everywhere in 2012.

Email ThisBlogThis!Share to TwitterShare to FacebookShare to Pinterest
Labels: A Shot After Midnight, Book News, Moon and Son Publishing