On This Day In History: Freemason George Washington Inaugurated On this day, April 30th, 1789, George Washington was inaugurated as first President of the United States. The inaugural ceremony took place on the balcony of Federal Hall in New York City, which was then the first United States Capitol.

Since dawn, a crowd of people had begun to gather around what would be Washington's home in New York at 3 Cherry Street. At noon Washington lead the crowd as they made their way to Federal Hall. 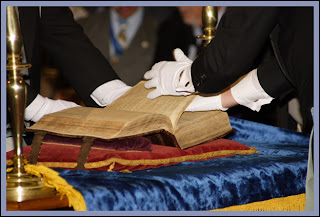 Upon his arrival at Federal Hall, Washington was formally introduced to the House and Senate, after which, Vice President John Adams, who had already been sworn in, announced it time for the inauguration. Washington moved to the second-floor balcony where he took the presidential oath of office, administered by Chancellor of New York Robert Livingston in view of the large crowd of people gathered on the streets.
The Bible used in the ceremony was from St. John's Masonic Lodge No.1, and in haste it was randomly opened to Genesis 49:13. Livingston shouted "Long live George Washington, President of the United States!" to the crowd, which was replied to with cheers and cannon fire. Washington later delivered the first inaugural address in the Senate chamber. 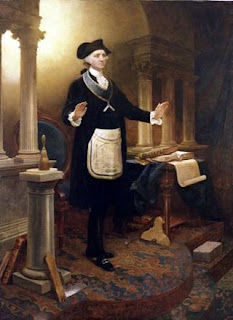 St. John's Lodge No. 1 still possess the Washington Inaugural Bible, and two years ago, it made a rare visit to the Grand Lodge of Illinois' 170th Annual Convocation, where it was on display during the two day meeting, and used during the installation of the new Grand Lodge Officers to obligate our newly elected Grand Master Richard L. Swaney.  It was well protected by members of St. John's Lodge No. 1 that accompany the Bible when it travels.
It was a very rare privilege for Illinois Masons to have such an important historic item present at our meeting.  It not only is historic as it relates to American history, but Washington is a very important part of the history of American Freemasonry.  To this day, American lodges open every meeting with the Pledge of Allegiance.  It was Washington that first brought the American flag into a Lodge of Freemasons, during the Revolutionary War--and it's been there, in every one, ever since.

Todd E. Creason is the author of Famous American Freemasons: Volumes I & II where you'll find many other great stories about famous Freemasons.