Where Did Uncle Sam Come From? 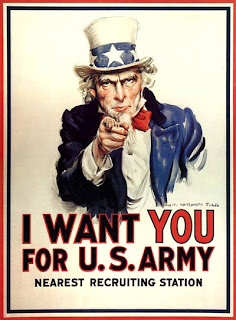 Most Americans probably believe Uncle Sam became popular because of this iconic poster, but the truth of the matter is, he's been around a little longer than you might think.  In fact Uncle Sam's predecessor, Brother Jonathan, goes back to the Revolutionary War.  Brother Jonathan was often portrayed as a negative stereo-type of American Patriots in British newspapers wearing a tri-cornered hat, and long military jacket.
﻿﻿
﻿﻿﻿﻿﻿﻿﻿﻿﻿﻿﻿﻿﻿﻿﻿﻿﻿﻿﻿﻿﻿﻿﻿The Uncle Sam we know now, was first seen in popular publications at about the time of the War of 1812 (I always forget when that war started exactly).  Anyway, he was most often depicted as an elder statesman who the personified the United States Government in political cartoons of the time.  He often wore clothing reminiscent of the American Flag, but there was a lot of variation in how Uncle Sam was depicted in the beginning, as everything from a rotund man that looked a lot like John Adams or Ben Franklin, to a thinly disguised caricature of Andrew Jackson (which isn't hard to imagine since he became a huge national hero after the Battle of New Orleans and about the time Uncle Sam made his first appearance).
﻿
﻿
But in 1919, a young artist James Montgomery Flagg designed a poster to encourage young men to enlist in the service during World War I.  Instead of going to the trouble of hiring a model to pose for the poster, Flagg used his own face, aging it, and adding a goatee.  Over 4 million copies of Flagg's poster were produced, and it is that image of Uncle Sam that most people recognize. The poster was so effective, and so popular, it was brought back for use again during World War II.
﻿
﻿Oddly enough, the famous American recruitment poster wasn't all that original.  It was based on a British recruitment poster made on the other side of the ocean for the same war that featured Lord Kitchener, Secretary of State for War, pointing at potential recruits in exactly the same way.

So we were the first one's to copy a good idea, but that same theme has been often reused and parodied hundreds of times since.  I bet you haven't seen the Lord Kitchener poster to the left, but I think there's a pretty good chance you're familiar with the Smokey the Bear poster. Smokey was featured in a similar campaign "Only You Can Prevent Forest Fires."

But without a doubt, that famous recuitment poster solidified our image of what Uncle Sam looks like.

So now you know!  Enjoy your weekend!