Walt Disney: Freemason Or Not? 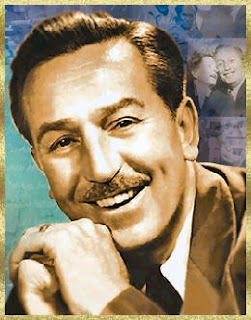 "You may not realize it when it happens, but a kick in the teeth may be the best thing in the world for you."

He was a great man, a great animator, he loved children, and he had an imagination that knew few limits.  He often been cited as a Freemason, in fact, often he's listed as a 33rd Degree.  I've read a lot about Walt Disney, and he was widely admired and respected.  He's many things to many people, but one thing he was not, was a Freemason.

Now part of what may have cause the confusion is that during the 1950s, Disneyland sponsored various clubs for its employees, including a knitting club, a shooting club, a skiing club, bowling and softball teams.  There was also a Masonic club at Disney, presumably for the employees who were Freemasons. 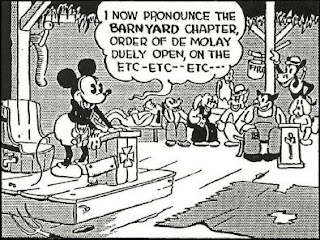 However, even though Disney wasn't a Freemason, he did belong to Demolay as a boy, which is a fraternal organization sponsored by Masonry.  While many Demolay do go on to become Freemasons, Walt Disney never joined a Masonic Lodge.  Walt Disney was kind of a big deal in Demolay--he was only the 107th member to join the organization, and a member of the Mother Chapter.  He was later inducted into Demolay's Legion of Honor, and the Hall of Fame.  He was very fond of the Demolay organization, and spoke out favorably about it often.  In fact, he made his creation, Mickey Mouse, a member of Demolay!

Without a doubt, Walt Disney's contributions has changed the world in many wonderful ways.  He's brought happiness, wonder, and imagination to millions throughout the world.  He was never afraid to push the boundaries, to try something new, and to find new ways to entertain his guests both in the theater, and in his famous park.

It's really too bad Walt Disney wasn't a Freemason--I'd have loved to profile him in one of my books.

Todd E. Creason, 33° is the Founder of the Midnight Freemasons blog and is a regular contributor.  He is the award winning author of several books and novels, including the Famous American Freemasons series. He is the author of the From Labor to Refreshment blog.  He is the Worshipful Master of Homer Lodge No. 199 and a Past Master of Ogden Lodge No. 754.  He is a Past Sovereign Master of the Eastern Illinois Council No. 356 Allied Masonic Degrees.  He is a Fellow at the Missouri Lodge of Research. (FMLR) and a charter member of a new Illinois Royal Arch Chapter, Admiration Chapter No. 282.  You can contact him at: webmaster@toddcreason.org