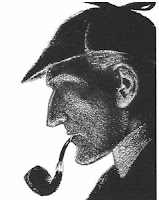 Everyone seemed to enjoy my post last week about Sherlock Holmes, so I thought I'd point out a really interesting book I just finished reading.  Few characters in literature have enjoyed the kind of fame as the detective Freemason Arthur Conan Doyle created.  To this day, his books and stories remain popular, his character has once again made the leap to the big screen (although little about Sherlock's lately incarnation is recognizable).  There are countless societies and organizations dedicated to the study of Doyle's character.  And other interesting fact--just like Star Trek, many of the fantastic technologies first "invented" by Sherlock Holmes have since come to pass--fingerprinting, blood spatter evidence, trace evidence, etc.

I enjoyed this book The Sherlockian--half was told in the current day, and half followed a fictitious story about Sir Arthur Conan Doyle and his friend Bram Stoker.  It's interesting, because as Star Trek has its Trekies, Holmes has its lunatic fringe groups too--and this story takes place during the annual meeting of the Sherlockian group The Baker Street Irregulars. 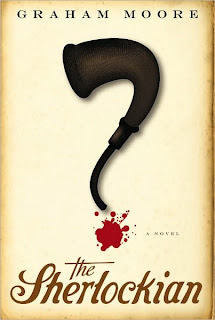 FROM THE PUBLISHER
In December 1893, Sherlock Holmes-adoring Londoners eagerly opened their Strand magazines, anticipating the detective's next adventure, only to find the unthinkable: his creator, Arthur Conan Doyle, had killed their hero off. London spiraled into mourning -- crowds sported black armbands in grief -- and railed against Conan Doyle as his assassin.

Then in 1901, just as abruptly as Conan Doyle had "murdered" Holmes in "The Final Problem," he resurrected him. Though the writer kept detailed diaries of his days and work, Conan Doyle never explained this sudden change of heart. After his death, one of his journals from the interim period was discovered to be missing, and in the decades since, has never been found.
Or has it?
When literary researcher Harold White is inducted into the preeminent Sherlock Holmes enthusiast society, The Baker Street Irregulars, he never imagines he's about to be thrust onto the hunt for the holy grail of Holmes-ophiles: the missing diary. But when the world's leading Doylean scholar is found murdered in his hotel room, it is Harold - using wisdom and methods gleaned from countless detective stories - who takes up the search, both for the diary and for the killer.
Enjoy!
~TEC