Hiram Rhodes Revels was born free in Fayetteville, North Carolina, on September 27, 1827. Educated in Indiana and Ohio, he graduated from Knox University in Illinois. Ordained in the African Methodist Episcopalian Church, Revels accepted a pastorate in Baltimore in 1860. He served as an army chaplain for a black regiment during the Civil War and helped establish schools for freed slaves. In 1869 the Mississippi legislature elected him to the United States Senate, in which he was the first African American member.

When Hiram Rhodes Revels, was escorted to the front of the Senate Chamber to take his oath on February 25, 1870, the Atlanta Constitution reported that “the crowded galleries rose almost en masse, and each particular neck was stretched to its uttermost to get a view. A curious crowd (colored and white) rushed into the Senate chamber and gazed at the colored senator, some of them congratulating him. A very respectable looking, well dressed company of colored men and women then came up and took Revels captive, and bore him off in glee and triumph.” 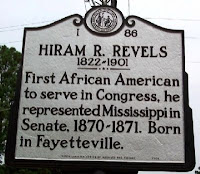 Hiram Rhodes Revels was a Prince Hall Freemason, and served as Grand Chaplain of the Prince Hall Grand Lodge of Ohio. He was elected to the Senate from Mississippi to fill the unexpired term of Albert G. Brown, who withdrew from the office in 1861 when Mississippi joined the Confederacy. After an ugly battle over whether Revels even qualified as a citizen, the argument was finally resolved in a 48-8 vote in favor of Hiram Rhodes Revels being seated.  He served a little over a year and later became the President of what is today Alcorn State University.