This is the ninth in a series of article about Benjamin Franklin's virtues: 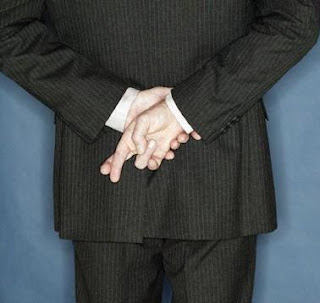 Use no hurtful deceit; think innocently and justly, and, if you speak, speak accordingly.

Often sincerity is confused with earnestness--genuine interest in those things a person professes to be interested in.  But actually sincerity is the absence of deceit.  In other words, honesty.

Sincerity isn't just about telling the truth, it's also about being trustworthy.  About earning people's faith in you by being a person that keeps his confidences and avoids deceit.  Without a doubt, Franklin felt that honesty and integrity were the marks of true character.

We live in a world where we don't think much about what we say or do.  Almost as soon as we have a thought, we slap it up on Facebook or Twitter it without any consideration about what it says about others, or what it says about us.  When people don't agree with us, instead of trying to see the world from their perspective, we attack them.  We don't think much about how our actions reflect on our character.  We live in a no-regrets society where bad behavior is perfectly acceptable.

Back in Franklin's day, men worked a lot harder on building a solid reputation, and strove to be known as men of good character.  And while without question they misbehaved, said things they later regretted, and may have made some of the same errors we do today, they seemed to be a lot closer to their core values than we are today.

Of course, back in that day, if you insulted someone's character, you might find yourself facing off with them in a duel.  That was back when character meant something, and it was so important to maintain, you'd defend it at risk of death.


This is one of a series of Wednesday postings that examine the 13 Virtues Benjamin Franklin believed necessary to achieve moral perfection. You can find all the related articles by searching the blog under the “Franklin’s Virtues” label.