Barack Obama: Freemason Or Not?

Here we go again!  I had no idea until I posted George W. Bush: Freemason Or Not? that there is actually another President that is believed by some to be a Freemason--our current President Barack Obama!  It was quickly brought to my attention. So I did a little checking on that.

THE EVIDENCE
Just like with George W. Bush, the "evidence" President Obama is a Freemason seems to be blurry photos of odd handshakes and hand signals, an anonymous report that somebody once sat next to him during a Masonic meeting, and there was a Time Magazine photo of his hands on the Presidential seal that sported a Masonic ring.  All the details about the sources of these stories are documented in an article posted by the Grand Lodge of British Columbia and Yukon.
THE MASONIC RING
One thing about that photograph of the ring immediately struck me. As the article from the Grand Lodge of British Columbia pointed out, that photo was probably taken for the article, and those hands most likely aren't Barack Obama's. I think that's probably correct. One thing I did notice is that ring is on upside down--at least it would be in Illinois. And it is presumed if Barack Obama is a Mason, he was made a Mason in Illinois. In Illinois, the general custom is for Freemasons to wear their rings with the points of the compass worn towards you--that ring is being worn with the points outward. Of course, he could have joined a lodge in another state--he has lived in several states over his lifetime and customs vary in different locales. I'm sure I'm going to be schooled about how rings are worn--if there's an expert on Masonic ring customs out there, please feel free to do so. 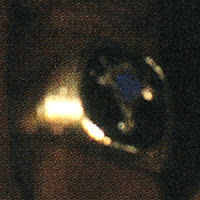 SO IS BARACK OBAMA A FREEMASON?
There is no evidence that Barack Obama is a Freemason--neither the Grand Lodge of Illinois nor the Prince Hall Grand Lodge of Illinois have any record of him being made a Freemason.  And no information has come from the Grand Lodges of any other state he lived in indicating he was ever a member of the fraternity.  If President Obama were a Freemason, you'd hear about it.  Those Grand Lodges would be proclaiming that fact far and wide as they do with every President and famous man that has been a Freemason.
And that makes guys like me who write about famous Freemasons very sad.  President Obama would make a great subject for the last volume of my Famous American Freemasons series.
~TEC