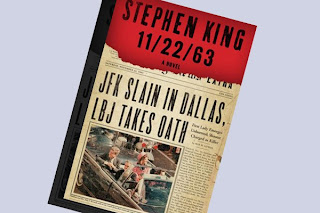 Stephen King started publishing books about the same time I started reading them. I can tell when and where I've read every one starting in about the fourth grade or so.  I was trying to think the other day which one I read first--it was The Shining.  That would have been in about 1977, and I was ten years old at the time.  It scared the hell out of me, so naturally, I read Carrie and Salem's Lot right after I finished that one, and I've been hooked ever since.

So I've grown up with him, and every time I start to read a new one, it's like falling back into step again with an old friend.  I think I may be the guy he calls Constant Reader--that I am. I haven't like all his books, in fact, there have been a couple I never finished.
But his newest book 11/22/63: A Novel is fantastic--even for those of us who weren't around when Kennedy was assassinated, I think at one point or another, we've all had that moment where we wonder what the world might have been like if it hadn't been for that one day in Dallas.  Stephen King explores that very question, as usual, in his own unique way.  He's always known how to use small details to really pull you in, and there are so many subtle nostalgic nuances, it's not long before you're completely immersed in that era in American history--it's difficult to put down once you get started.  It's available in Kindle and Nook editions as well.
Stephen King has another one coming out soon that has a lot of people excited--the latest in his epic Dark Tower series--The Wind Through the Keyhole.  I wrote about that series here.  So keep your eye out for it also--it's due out in April 2012.
Happy reading,
~TEC