A Dark Day In History: Coffee Rationing Began In 1942 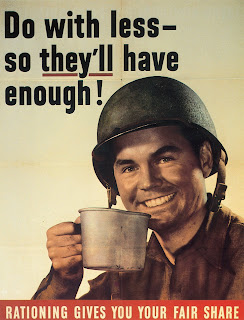 Many things were in high demand when America entered into WWII after Pearl Harbor, and to make sure there was enough, many items were rationed, including sugar, butter, gasoline, rubber, meat, etc.
But without a doubt--people weren't very happy when coffee became one of those items in high demand during the war.  The rationing of coffee began in November 1942, in order to make sure our G.I.s fighting in the war had enough.  Roosevelt even gave up his morning cup and switched to milk (or so the story goes.)  Coffee drinking Americans over the age of fifteen could get a pound of coffee every five weeks--that's barely a cup a day.

There were a lot of tricks to stretch that out--they reused coffee grounds making a watery brew they called "Roosevelt's coffee."  They used less and percolated it longer.  They also mixed the coffee with chicory or a grain based coffee substitute called Postum to stretch the supply out further. 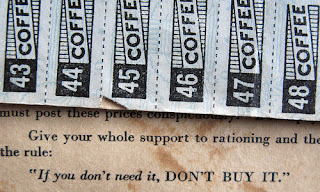 However, it didn't last long.  Coffee was the first item to come off rationing--the coffee crisis was over by September 1944 although the government jacked the price up on coffee substantially to reduce the demand, and made it well known that if supplies ran short, coffee could very well be rationed again.  But that didn't prove to be necessary.

I wonder which event during the Roosevelt years was more popular--the lifting of Prohibition in 1933, or ending the coffee rationing in 1944?

Email ThisBlogThis!Share to TwitterShare to FacebookShare to Pinterest
Labels: American History, On This Day in History, Theodore Roosevelt, Trivia