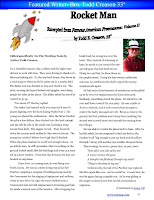 I've mentioned the Working Tools Masonic Magazine before, and have given it glowing reviews--I like it because it's well produced, and offers a little something for everyone.  The magazine has been around since 2006, and has published 48 issues to date.  Cory Sigler, the editor of Working Tools Magazine contacted me a couple months ago, and asked if I'd be interested in providing a piece for the magazine.  I was, and I did--they published my piece Rocket Man in their first issue (January) of 2012.
Cory called me last week to tell me that the January edition of Working Tools Magazine had broken all previous records for hit count in the first week after it was released.  So check out the magazine--you'll enjoy it.  Working Tools Magazine also has a Facebook page here.
~TEC