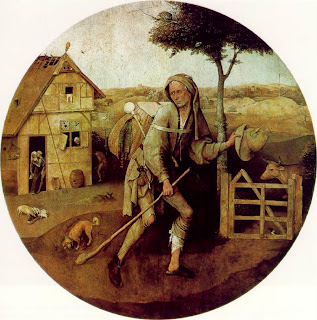 I wrote a piece a few weeks ago about an ancient lodge room found in Pompeii that received a lot of favorable comment.  I thought I'd explore that question of how long Freemasonry has been around a little further.

I'm sure there are a lot of Freemasons out there that will recognize this painting by Hieronymous Bosch (circa 1510) called The Wayfarer.  It was featured on the cover of a very popular book amongst Freemasons--A Pilgrim's Path by John Robinson.

The painting is interesting because it goes back to the sixteenth century, and it seems to incorporate Masonic themes--many are very obvious. John Robinson pointed many of these out in his book, like the brace on the fence that looks a lot like a square. The Wayfarer's attire also suggests Masonic influence.  He's wearing a slipper on one foot, and his pants leg is rolled up.  He has a plumb-bob in his hat instead of a feather (which is believed to have been a Masonic working tool in the past).  Even the way the straps of his backpack come across his shoulders is suggestive to Masons.  John Robinson wrote more about his painting and the Masonic symbolism it contained here.

But I think it's pretty obvious by this painting that Freemasonry was alive and well in 1510.