As you know, I occasionally review books on The Midnight Freemason, and every time I mention Stephen King's Dark Tower Series, the hit count goes through the ceiling--so why not do it again?  Here we are less than a month away from the release of the first Dark Tower book since we thought he finished the series in 2004.  I guess he had a little more to say about Roland's world after all.
Stephen King’s Upcoming Dark Tower Novel, The Wind Through The Keyholeis due out on April 24, 201.  In this new book, we join Roland and his ka-tet as a ferocious storm halts their progress along the Path of the Beam. As they shelter from the screaming wind and snapping trees, Roland tells them not just one strange tale, but two–and in doing so sheds fascinating light on his own troubled past.
In his early days as a gunslinger, in the guilt-ridden year following his mother’s death, Roland is sent by his father to a ranch to investigate a recent slaughter. Here Roland discovers a bloody churn of bootprints, clawed animal tracks and terrible carnage–evidence that the ‘skin-man’, a shape-shifter, is at work. There is only one surviving witness: a brave but terrified boy called Bill Streeter.
Roland, himself only a teenager, calms the boy by reciting a story from the Book of Eld that his mother used to read to him at bedtime, The Wind Through The Keyhole.
"A person’s never too old for stories," he says to Bill. "Man and boy, girl and woman, we live for them." 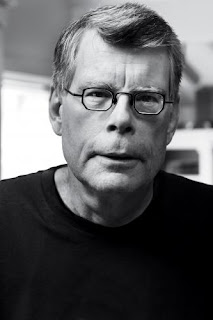 What Stephen King Has To Say About It:
Most of the people holding this book have followed the adventures of Roland and his band—his ka-tet—for years, some of them from the very beginning. Others—and I hope there are many, newcomers and Constant Readers alike—may ask, Can I read and enjoy this story if I haven’t read the other Dark Tower books? My answer is yes, if you keep a few things in mind.

First, Mid-World lies next to our world, and there are many overlaps. In some places there are doorways between the two worlds, and sometimes there are thin places, porous places, where the two worlds actually mingle. Three of Roland’s ka-tet—Eddie, Susannah, and Jake have been drawn separately from troubled lives in New York into Roland’s Mid-World quest. Their fourth traveling companion, a billy-bumbler named Oy, is a golden-eyed creature native to Mid-World. Mid-World is very old, and falling to ruin, filled with monsters and untrustworthy magic.

Second, Roland Deschain of Gilead is a gunslinger—one of a small band that tries to keep order in an increasingly lawless world. If you think of the gunslingers of Gilead as a strange combination of knights errant and territorial marshals in the Old West, you’ll be close to the mark. Most of them, although not all, are descended from the line of the old White King, known as Arthur Eld (I told you there were overlaps).

Third, Roland has lived his life under a terrible curse. He killed his mother, who was having an affair—mostly against her will, and certainly against her better judgment—with a fellow you will meet in these pages. Although it was by mistake, he holds himself accountable, and the unhappy Gabrielle Deschain’s death has haunted him since his young manhood. These events are fully narrated in the Dark Tower cycle, but for our purposes here, I think it’s all you have to know.

For longtime readers, this book should be shelved between Wizard and Glass and Wolves of the Calla . . . which makes it, I suppose, Dark Tower 4.5.

As for me, I was delighted to discover my old friends had a little more to say. It was a great gift to find them again, years after I thought their stories were told.

I guess the most surprising thing for me so far, is that the book listing on Amazon indicates it's only 320 pages--that's pretty short for a Stephen King novel.  Could that suggest more is on the way?