Napoleon Bonaparte: Freemason Or Not? 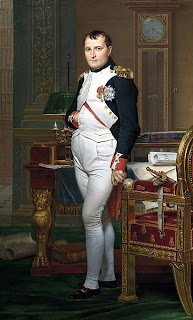 Few figures in history are more recognizable that Napoleon Bonaparte, military leader and later Emperor of France during the time of the French Revolution.  His legendary ego almost as famous as his exploits.
It’s often been said that Napoleon Bonaparte was a Freemason--initiated into a French Regimental Lodge, probably the Army Philadelphe Lodge in Malta between 1795 – 1798.  But, there has always been some disagreement over that fact.
Recently, a document from 1805 has surfaced that is supposed to prove that Napoleon was a Freemason.  It is an account of a Masonic dinner attended by “Brother Bonaparte.”  Whether this document ends the controversy or not has yet to be seen.
So I believe in this particular case, it’s safe to say that the jury is still out on whether Napoleon Bonaparte was a Freemason.
~TEC

Email ThisBlogThis!Share to TwitterShare to FacebookShare to Pinterest
Labels: Famous Freemason, Freemason or Not?, Myth