What Is The York Rite of Freemasonry? 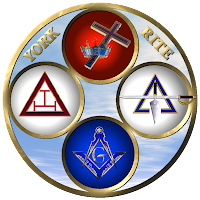 Some time ago, I wrote a piece about the Scottish Rite of Freemasonry which is an appendant body of Freemasonry. I received a lot of email about that article, and the most common question was what is an appendant body.  Basically, these appendant bodies are "fraternities within the fraternity."  Once you're a Master Mason, you can join any of a number of appendant bodies--the Scottish Rite, and the York Rite are the two best known and offer additional degrees to the three craft degrees a Master Mason receives in his blue lodge.
While I'm a member of all three bodies of the York Rite, I'm not exactly an expert--I haven't spent very much time as of yet enjoying my membership in the York Rite.  So this is pretty basic information, and if I get anything wrong, I'm sure somebody will let me know.

There are three bodies within the York Rite, each conferring a series of degrees (ten in all)--the chapter, council, and commandery. 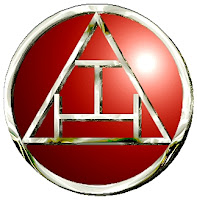 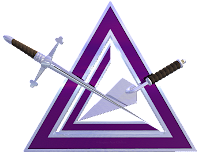 Membership is the Council is not required in some jurisdictions for membership in the Knights Templar. 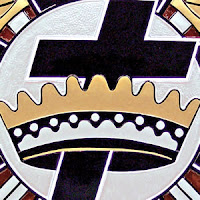 THE KNIGHTS TEMPLAR
The Knights Templar is unique in Masonry--while other Masonic bodies require only a belief in a Supreme Being regardless of religious faith, membership in the Knights Templar is open only to Christian Masons.  Although it has been long claimed that the historic Knights Templar founded Freemasonry, or at the very least took refuge within Freemasonry to avoid persecution, there is little evidence to support such claims.  Besides being a Christian, in order to join the Knights Templar, members must have completed their degrees in the Royal Arch Chapter, and in some places, the Cryptic Degrees as well.

There are three degrees conferred by the Knights Templar:

As I said I'm not an expert in the York Rite, but I will tell you, that the degrees of the York Rite are some of the  most ancient degrees in Freemasonry, and the ritual presentations, by far, impressed me the most.

There are many, many appendent bodies of Freemasonry, and perhaps in the upcoming weeks, I'll take a little time to talk about a few more of them.

If you would like more information about the York Rite, I would recommend Christopher Hodapp's book Freemasons for Dummies.  Don't let the name of the book fool you, it's one of the best resources for both Masons and non-Masons alike about our Fraternity.  I reference his books often when I'm fact-checking blog posts like this one.  In fact, all of Christopher Hodapp's books are excellent.  And be sure and check out his blog--there's always something of interest on the Freemasons for Dummies blog.  I check it every day.