Spring Is In The Air: Are You Ready For Some Baseball?

Every year I do this post, and it’s about the same post every year—different pictures, and a few additions to the text each year, but I don’t change it very much.  It’s about the great American sport of baseball.  I’m a Cub fan, so every year, as the season approaches, I think about what the sport means to me.  I’ve spent many happy hours at the Friendly Confines of Wrigley Field, and each year, I do this tribute to baseball, and it’s most famous broadcaster, who many of us still miss every game—Mr. Harry Caray.  And no, in case you’re wondering, he wasn’t a Freemason.  So here it is . . .
It's hard to believe it's been fourteen years since Harry Caray left us.  As many times as I visited Wrigley Field over the years, you'd think I would have seen Harry Caray sing "Take Me Out to the Ballgame" dozens of times, but in reality, I usually spent that time scrambling to get the last beer of the game while I could (a practice I'm sure Harry wouldn't have faulted me for).  To this day, every time I hear "Take Me Out to the Ballgame" I get both thirsty and anxious at the same time.  I wonder if Harry knows he trained thousands of beer drinking baseball fans the same way Pavlov trained his dogs?

Every year, on opening day, I think about Harry Caray, and how much I used to enjoy listening to him, and how much I miss hearing him still.  See there used to be this thing called "radio" and people used to listen to games on this device in their cars, or at work, and sometimes by way of a hidden earpiece at church (everybody knows that guy, and he usually busted himself out by cheering out loud during the sermon when a great play was made).
Nobody announced like Harry "It might be . . . it could be . . . it is!  A home run!"  And there was nothing sweeter after the last pitch of a tough game than hearing Harry Caray shout "Cubs win!  Cubs win!  Cubs win!"  They still play a clip of Harry shouting that after Cubs game broadcasts every so often, and still love hearing that voice from the past, and it still has the same effect on me to this day. 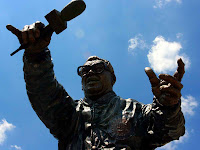 A statue forever immortalizes Harry Caray's contributions to the Chicago Cubs outside the Friendly Confines.  For those of us who are old enough to have heard him, he'll always be as much a part of Chicago Cub-lore as Wrigley Field, the ivy, the goat, the old green scoreboard, and the seventh inning stretch (oh yeah, and the ice cold Old Style in the bleachers).
It doesn’t matter if you’re a Cub fan, a Pirates fan, or a Yankees fan—it’s about the game.  I think they have a team in St. Louis, too—I’m trying to remember their name . . . oh, yes, the Cardinals.  Just kidding.  Actually, it was that legendary rivalry between the Cubs and the Cardinals that helped bring baseball back after the strike—two heavy hitters named Sosa and McGuire.
For those of you too young to remember . . . this is what the seventh inning stretch sounded like back in the day.  Did you see the sign--"Win or Lose, It's the Cubs!"